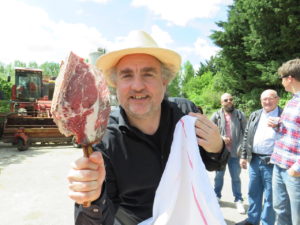 Yves-Marie Le Bourdonnec has a lot of opinions, only some of them about meat. Here’s my profile on this French media-anointed “star butcher” for Eater.com:

On a perfect Sunday in late May, with blue skies and fluffy clouds straight from a Rococo painting, Yves-Marie Le Bourdonnec, the most embattled butcher in Paris, was in his element. In the village of Le Plessier-Huleu (population: 75), about 67 miles northeast of Paris, he had gathered the employees of his three-shop butchery empire, along with their families, his students, and other select associates — about 30 people in all — for an annual barbecue at the farm of one of his breeders.

Le Bourdonnec wore all black, in keeping with his rock ’n’ roll image, though he topped off his curly gray locks with a brimmed straw hat. The group took a stroll to inspect the herd of Samuel Fouillard, a 28-year-old farmer who has been working with Le Bourdonnec for about four years, and whose steaks they’d be tucking into later. A cluster of cows and calves were grazing calmly in a field when nature inevitably called. A calf took a long, hosing piss, unperturbed by the onlookers. “That’s not milk!” Le Bourdonnec called out to the guffaws of his disciples.

Often named, along with his frenemy Hugo Desnoyer, as one of the luminaries of the slice-and-dice world of French butchery, the 49-year-old Le Bourdonnec has as many titles as there are ways to carve a cow: “the bohemian butcher,” “the king of butchers,” and, as he has called himself, “the angry butcher.” Simultaneously exalted and deemed an outcast, Le Bourdonnec was expelled in 2012 from La Confédération Française de la Boucherie, the French butchers’ federation, for proclaiming that British cattle breeds produce the best beef in Europe. His shop in Paris’s 16th arrondissement and social media accounts are regularly targeted by animal rights activists, who have splashed the outside of his shop with faux blood and plastered it with images from slaughterhouses. At the same time, he has many high-profile clients, counting among them Mick Jagger, Pharrell Williams, aging French rocker Johnny Hallyday, and Michelin-starred chefs Alain Ducasse and Guy Savoy.

Go to Eater.com to read more.