“The samurai is a good parallel for understanding what a Meilleur Ouvrier de France is. They suffer in order to achieve their goal.”
— Philippe Urraca

The son of immigrants from Spain’s Aragon region, fleeing Franco’s Spain, Philippe Urraca is first and foremost a Meilleur Ouvrier de France (Best Craftsman in France), a title won by only the unique few in trades ranging from leatherwork to computer design to cooking. Having gained the prestigious title after three grueling attempts, Urraca is currently the president of the pastry category of the MOF competitions, as well as a judge on France 2’s Qui sera le prochain grand pâtissier ? (Who Will Be the Next Great Pastry Chef), a sort of Top Chef for pastry chefs.

Though he might not have as much mousse in his hair as the other TV judges, or as wide a smile, when it comes to a question of interpreting a French classic — a Tropézienne, say, or a Paris-Brest — as Urraca himself points out, “When I give an opinion, that’s what wins out in the end.”

In honor of the current Meilleurs Ouvriers de France exhibit at the Musée des arts et métiers (which bafflingly omits the most famous MOFs, those who have won titles in cooking-related professions) as well as Urraca’s book Patisserie: A Step-by Step Guide to Creating Exquisite French Pastry, which is due out in English in November, I share this previously unpublished interview with Urraca at the time of the last MOF competitions.

Perhaps we can start by talking about your origins.
My father was political refugee from the war in Spain. At the end of the Spanish civil war he emigrated to France to avoid being arrested by the Franco regime. In Spain he was a patissier. But in France when he arrived, they were looking for agricultural workers, so he did farm work for four, five years, and like many Spanish refugees, he learned masonry. His dream, though, was to open a pastry shop when his children grew up. 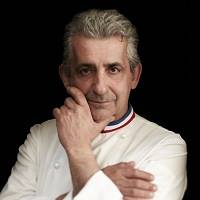 Urraca with the blue-white-red collar, signifying a MOF.

I wanted to be a jockey. My father didn’t agree. He said, You don’t make a living this way, and there are only a few that succeed.

Since he was pastry maker he wanted me to enter the profession. After [a three-year apprenticeship] I returned and worked with my father for a year, year and a half. Then we had a falling out. We both had a rather strong character, so I decided to open my first shop at 19 years old, in Giment. The first store worked very well. From there I thought, Well, now I have to become recognized in my field, so I decided to pursue [advanced studies in pastry]. Afterward I started doing pastry competitions. Then I said, Now I want to be Meilleur Ouvrier de France. And I got it into my head that my future lay in that direction.

What changed?
I’m like that: when I go for something, from the moment I decide to go for it, I go for it with all my heart. I didn’t choose my profession because I wanted to do it. I chose it by default,

but from the time I was in it I didn’t want to remain a basic pastry maker. I decided I wanted more of a future.

But it wasn’t easy. You attempted the MOF competition three times.

When I decided to be a patissier, I decided I wanted to be among the best. It was out of the question that I do this job and I be a patissier in a little village. That didn’t interest me. So the goal for me: I’m going to Lenôtre, I’m going to Fauchon, I’m going to Dalloyau. I went to Paris, to see the shop windows – I was 21, 22 – to learn what they did. Today my greatest pride, as a son of refugees, as someone who was from a small village, was that I was able to go to those places. That was the most beautiful reward, to be recognized by people in the métier.

“It was only after my father’s death that my sister found all the newspaper articles about me in his wallet.”

What did your father think?
My father didn’t talk about it much. It was only after his death that I learned, my sister found there were all the newspaper articles about me in his wallet. He never spoke to me about it. So when I become Meilleur Ouvrier de France, he was already deceased. Once he came to a completion where I won first prize, but he never showed he was happy. He was someone who had lived through difficult times.

Being a son of a refugee, I wanted to show that you could be of Spanish origin and also be a recognized French pastry chef. That was important for me to show that. Maybe it was that that gave me the strength and the will to … I don’t know.

What’s the difference between TV competitions and the MOF cometition?

I take both jobs very seriously. But for me, being a MOF is an investment for a lifetime, a career. MOF competitors will search in their guts for the maximum that they can give. On a TV show, it can be forced, because there are cameras. In the MOF competitions, we allow them three months of advance preparation. There are no traps, we don’t look to see an individual’s reaction when they’re surprised. On TV you do, because it’s important for the spectators. Both are interesting, but if I had to leave one tomorrow, that would be TV.

You said that there are fewer contestants for the pastry MOF competition in recent years. Are today’s chefs not up to the task?
If you want to become MOF, you have to go to bed thinking of MOF, wake up thinking about MOF. You have to practice, you have to live it. You know, in Japan, the samurai are people who suffer continually, trying to surpass themselves. We’re a bit like that. And the day you become MOF, it continues because you have to surpass yourself again and again, because you don’t want to disappoint. So today, people don’t want to suffer like that. Maybe they’re right.