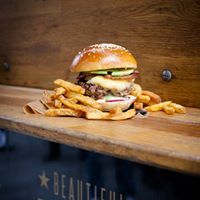 Cantine California offers its top burger in the great outdoors.

Paris hitched its wagon to the gourmet burger train a few years ago, resulting in chi-chi burgers popping up all around town. This was part of a general burger tidal wave, as French hamburger sales exploded. According to one study, 75 percent of French restaurants now serve hamburgers, and the American staple is neck and neck with the traditional jambon-beurre sandwich (1.19 billion burgers vs. 1.23 billion jambon-beurres consumed in 2015).

“Despite the perception of the French, they love American popular culture,” says Canadian-American Jordan Feilders, proprietor of Cantine California. “The burger has become the medium of choice to get that pop culture fix.”

Obviously, we here at Paris Chow can’t go to all of the (by these statistics) 30,000 Paris restaurants that serve burgers. But with that caveat, here are our top three. And all of them beat the pants off of Five Guys, which has recently sprung up on the Champs-Élysée (do not even waste your time on the long lines).

If, while in Paris, what you wanted was an American-style burger, you probably couldn’t do better than to go chez Feilders, food truck owner and self-described foodie. Cantine California offers the kind of big, fat juicy burger (using a “secret mix” of organic beef) that you dream of when you have a red-meat craving. The food truck parks itself in two locations, one near the Luxembourg Gardens, the other near the Place Vendôme; there’s also a casual restaurant in the 3rd arrondissement.

Feilders has a magnanimous view of his French competitors, whose products he tries regularly. “They do a French interpretation of a burger. We do California food by Californians. Together we’re creating new references.” 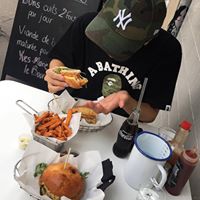 Blend has five locations in Paris.

Victor Garnier Astorino, a graduate of the respected French business school École Supérieure des Sciences Économiques et Commerciales, did tons of research before opening his Blend chain in Paris, from studying up on the history of the hamburger, to working at Starbucks and McDonald’s to find out how they operated, to eating tons of burgers all over the world. He also did careful sourcing, working with famed butcher Yves-Marie Le Bourdonnec, known for working with Michelin-starred chefs.

The result is a rather delicate burger on a brioche-like bun with toppings like onions caramelized in balsamic vinegar, blue cheese from the French Auvergne region and homemade ketchup. Definitely French interpretations of the burger, and served with good double-fried frites.

Blend, at five locations around Paris. 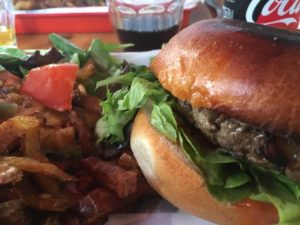 Located near the MK2 cinema, Persillé is great for an after-film snack.

Located conveniently near the MK2 Bibliothèque cinema (which, by the way, shows many films in V.O., i.e., in English), with a pleasant outdoor terrasse, Persillé is both a butcher shop and a restaurant. The “100 percent French,” pasture-grazed beef from small farmers is ground on the premises.

The Butcher Burger was a meaty burger on a (bit too crumbly) toasted brioche bun, topped with bacon, a mild cheddar and what seemed like homemade ketchup, with a nice acidic bite. The Cantal Goya (a play on a yéyé singer named Chantal Goya) boasted chorizo, Cantal cheese and cooked green peppers. Though the fries had good flavor, they were heavy and greasy, so I would recommend instead the salad — a good counterpoint to the healthy serving of viande.