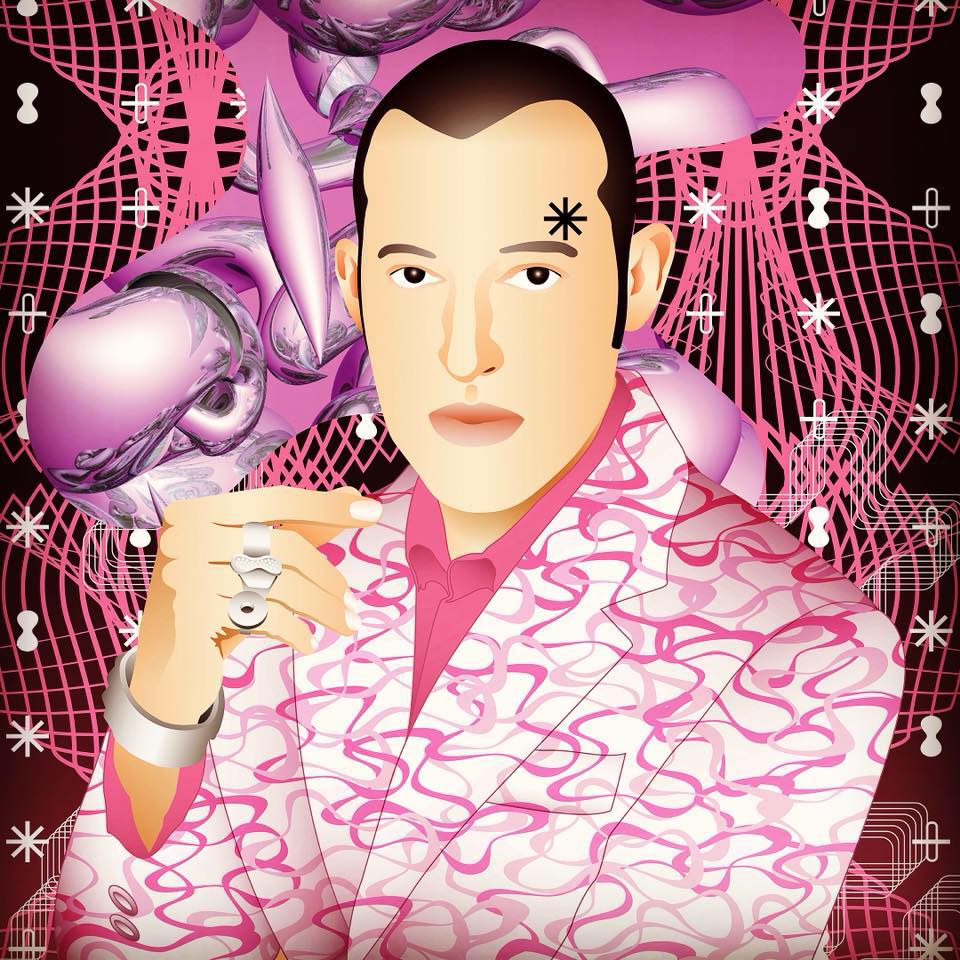 THE TINY LOUNGE area of the chic new restaurant Morimoto is like a bamboo womb. The brown floor covering swaths not only the floors but the curvy walls and ceilings.

An elongated porthole in the second-floor space looks out over the dining floor. The floors and ceilings of the main room are also fashioned of the trendy surfacing, and the white plaster walls erupt into biomorphic, sculpted shapes.

All these curves contrast with the actual shape of the long, rectangular room and the geometric lines of the booths, which change colors, and glowing glass tables.

The effect is simultaneously space age-y and organic.

Though the restaurant is named for the chef, Masaharu Morimoto, the culinary star will have to fight mightily with the decor of his restaurant (a venture with Stephen Starr) for center stage.

This may not be surprising because the designer of this space is one Time magazine called “the Most Famous Industrial Designer in All the Americas,” Karim Rashid. 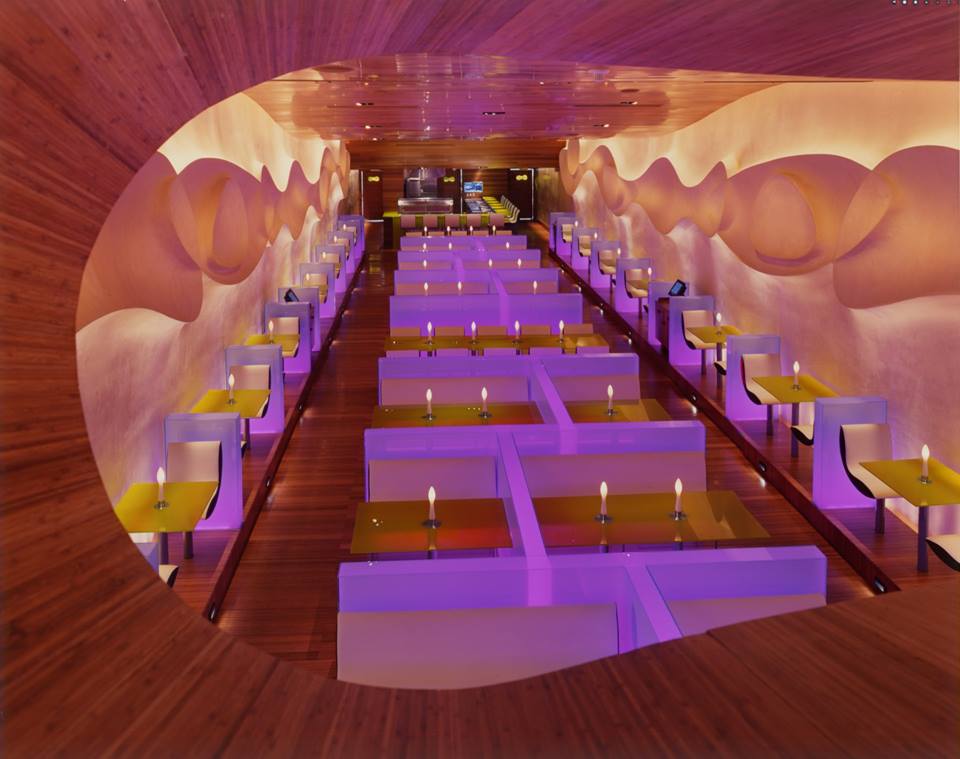 A proponent of a school of designer he’s christened Blobism — a kind of “sensual minimalism,” as he puts it — Rashid has a level of ambition that may best be expressed by the title of his new coffee table book, “Karim Rasid: I Want to Change the World.”

Though Rashid may not be a household name — yet — one of the estimated 800 objects he’s produced since starting his own company may well be in your home.

His $8 Garbo trash can, manufactured for the Toronto-based housewares manufacturer Umbra and offered in stores like Bed, Bath and Beyond, has sold almost 2 million copies.

Recent items on the Rashid Hit List range from high to low and back again — blurring the line between commerce and art. These include the inexpensive polypropylene Oh chair for Umbra, a two-in-one perfume bottle for Issey Miyake, a manhole cover for Con Edison and an art installation commissioned by the University of Pennsylvania’s Institute for Contemporary Art, “stratascape,” on which he collaborated with his architect brother, Hani.

But in a scary post-9/11 world where Americans, at least, seem to want to regress to eating mashed potatoes, sitting on a lumpy replica of their parents’ couch — is there a place for Rashid’s futuristic conceptions?

“I think we’re too far gone,” Rashid said in a recent telephone conversation from his New York office. “I think design has had such an impact on everyday life that there’s no turning back.”

He preducts that as people realized their own mortality, they will demand more from the products they use, not less.

Born in Cairo of a British mother and Egyptian father, Rashid was raised largely in Canada, where his father was a television set designer.

“Since the age of 3 or 4, all I ever did was draw products — eyeglasses, shoes and stereos,” Rashid remembered. He still recalls fondly an orange Braun clock radio he had when he was 10.

His future as a designer of consumer goods seemed destined.

Rashid’s stated aim, however, is not simply to clutter up our homes with more stuff, but to create objects that work better and give more pleasure.

In the tradition of the minimalists of the last century, multifunctionality is key. (His Q Chaise for Umbra converts from a cube to a chair to a lounger.)

“Every new object should replace three,” he likes to say.

But unlike the often stark, boxy style of minimalism, his curvaceous, computer-generated forms (which have been compared to eggs or a woman’s figure) have a sense of whimsy and fun.

The 41-year-old has been lauded as a designer who is not merely a pie=in-the-sky dreamer, but one who is hard-working and savvy about the latest materials and production techniques. With a nuts-and-bolts client list that early on included such companies as Black & Decker, Samsung and a medical equipment manufacturer, Rashid can not only design a better, more beautiful mousetrap but he can also tell you the manufacturing specifications.

And as demonstrated by the inexpensive Garbo can (so named to reflect its voluptuous shape and to play on the word “garbage”), Rashid does not design only for well-heeled design freaks in New York.

George Marcus, who teaches a course in contemporary design at the University of Pennsylvania, considers Rashid one of the “three top celebrity designers around at the moment.”

“I asked my class how many people owned the Garbo can, and half the class owned it,” Marcus said.

Marcus pointed out that these were not only design nerds, but also students majoring in business, engineering and other fields.

Now that Rashid has made his name in such mass-market items as trash cans, he is moving into a more elite realm, working for international fashion desitners, designing two new hotels, one in Los Angeles and one in Greece — not to mention an upscale restaurant in Philly (his first) to be followed by another Morimoto restaurant in New York’s meatpacking district.

As he works furiously in the present, he’s also looking ahead — to the kids at the school across from his Chelsea office. “That’s the future market,” he said.

He uses the front of his studio as a little test market, putting new items he’s designed in the window.

“Kids hang out at lunch and sit and stare at the stuff, and they love it,” Rashid said.

“The big turning point was the baby boomers, because baby boomers are ex-hippies, so they let go of these traditions. Now these ‘kidults’ —50-year-olds who wear Nikes and listen to techno music — and bringing up kids. Their tastes and values and behaviors have changed enough that design is here to stay.”

Rashid does not merely sit back and observe the market but also proselytizes the gospel of design, traveling more than half the year to give talks and hustle his concepts. (He recently made a trip to Philly to speak at the opening of his ICA exhibit.) He has also made time to teach — at Philadelphia’s University of the Arts and New York’s Pratt Institute among others.

His laden roster of clients and activities creates a frenetic pace for Rashid — “I’m obsessed,” he said. An e-mailed list of current projects numbered 45.

Yet he’s the first to admit that his ideas are more often rejected than accepted, often for being too far ahead of the times.

But Rashid, reportedly an insomniac, is not going to let up any time soon. His personal reaction to 9/11, he said, was that “my 10-year agenda has been condensed to five. I want to do more, not less.”

“To get an object into every home in the world.”